“So what is it that you are working on?” 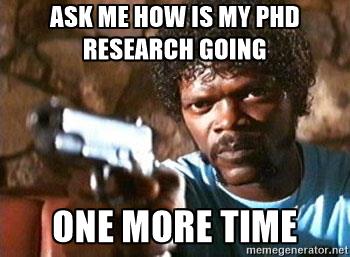 The fateful question to which every doctoral student must have a very crisp answer. The reality is that the answer can at times feel foggy even to the student (let alone to the inquirer!), especially in the early days of a doctorate.

But I am now in my third year of the DPhil, having completed a Master of Studies the year before that. As you’d imagine, over time the project has developed. At present, I am through all the formal checkpoints in the program before final submission (there are two such checkpoints in the DPhil, Transfer of Status after your first year, and Confirmation of Status after your second).

So we are now in the final stretch! Here’s a recent attempt at articulating what I am up to. I love the work! So, despite the truth behind the above picture, do feel free to ask me about it as much as you would like. If anything, it will help me prepare for my final viva, where I have a feeling an answer along the lines of the meme won’t quite cut it.

Theological Articulation as a Species of Testimony

“If the New Testament has invented neither the word witness (martus) nor the thing itself, it has given them new and decisive meanings that have left their deep and durable imprint on our relationship to that word and that act. The immense and rich philological, historical, exegetical, theological, philosophical literature devoted to witnessing according to Christianity is such that it would be absurd and pretentious to renew the analysis.”

Every serious theological endeavour risks absurdity and pretension. How can we presume to adequately listen to, let alone insert a worthy voice into, all the Christian tradition bears to us on the topics we feel compelled to hazard again and again? And as seen above, contemporary French phenomenologist and theologian Jean-Louis Chrétien (1952 – ) senses the weight of this objection to be particularly true of the field of inquiry that the this thesis ventures: research into the biblical, current philosophical, and theological dimensions of the category of witness/testimony, in search of its implications for the development of a modern theology of human knowledge as it relates to the epistemic posture most apt to the work of Christian theological articulation. The central thesis question is: What is the significance of the biblical, contemporary philosophical, and theological category of testimony for the epistemic stance that contemporary Christian theological articulation adopts?

In answer to this question, I argue that Christian theological articulation is truest to itself as a response to God’s central revelation in Jesus Christ when it adopts the epistemic posture of a witness – with all the limitations and potentialities inherent therein. In support of this argument I maintain that a contemporary rise of philosophical debate on the nature of ‘witness’ in both phenomenological and analytic discourses are currently furnishing rich discussions on the nature of witness which invite the work of Christian theology to re-examine its roots in the posture of testimony, and provoke it to explore afresh the epistemic potentialities and limitations of that stance. This fundamental Christian posture, apt as it is for response to God’s self-witness, is evident in the earliest Christian documents and most prominent in the Fourth Gospel. At its heart it recognises a call not merely to ‘hear’ its own voice, or ‘see’ its own image, but instead to be embraced in a ‘seeing and hearing’ of God in Jesus Christ, a genuine ‘seeing and hearing’ which provides the ground for Christian theological articulation, but only ever understood within the epistemic stance of the witness.

Though Chrétien notes the pretension of attempting to advance the discussion on the theological significance of the category of witness for understanding the nature of human knowing, and by extension the nature of theological articulation, we take comfort in the fact that he nonetheless went on to engage it afresh. He did so at the request of the French journal Revue Philosophie for its 88th volume,[2] dedicated as it was to the drawing together into one discussion the analytic, biblical, and ontological aspects of the topic of témoignage.[3] Clearly Philosophie saw the need for facilitating an interdisciplinary discussion on the category of testimony and its relation to knowing, and it is in addressing this ongoing need that this project finds its potential for advancing scholarly insight into the field.

It continues to be an exciting and strategic moment to engage the question of testimony and its relation to Christian theological articulation. Many of the central figures in the history of modern philosophy have addressed the question of how testimony relates to knowledge, including Locke, Reid, Hume, Kant, Russell, and Wittgenstein. However it was Coady’s Testimony: A Philosophical Study (1992)[4] that initiated the stream of analytic research into testimony that has now come to be recognised as a separate sub-discipline within epistemology, and one of its most generative current developments at that.[5] On the continental side of the philosophic divide, Paul Ricoeur provided a theologically informed phenomenology of testimony as a means of understanding the convergence of the transcendent with human history.[6] More recently Jean Louis Chrétien has continued to develop phenomenological reflection on the nature of human attestation by emphasizing how our speech is always and only in response to a prior call upon the self which wounds but also frees human testimony.[7] Biblical scholars and theologians have likewise already begun the work of relating the Christian tradition to these philosophical developments, using especially the analytic reflection on testimonial knowledge as a means of attempting to revive Old Testament historiography,[8] of managing the diversity and unity of Old Testament theology,[9] and more recently of reconfiguring Christian conceptions of divine revelation,[10] to name only a few approaches. It is very rare indeed, however, to find interdisciplinary work that seeks an answer to the question of testimony and its relation to human knowing that is enriched by the biblical, analytic, phenomenological, and theological spheres together. This thesis engages this interdisciplinary need, as incipient as its contribution can only be.

[1] Chrétien, “Nine Propositions on the Christian Concept of Witness,” 86.

[5] Gelfert, A Critical Introduction to Testimony, 1–2.

[9] Brueggemann, Theology of the Old Testament.